Second off the rank for this month's box is King River Gold from Milawa Cheese Co in (guess what) Milawa Victoria.

February 07, 2018
Second off the rank for this month's box is King River Gold from Milawa Cheese Co in (guess what) Milawa Victoria.

A washed rind cheese, this has only a mild odour, and is quite an easy cheese to get into, unlike the more potent cousins Taleggio or Limburger.

Once past the faint 'old socks' armour, this is has a somewhat salted and slightly nutty flavour to its slightly runny interior. It is very rich - like a double brie in mouth-feel, but despite the saltiness the flavour is much more delicate than that of a brie.

The tasting notes recommend serving with a Shiraz, muscatels, and salami.

Combining all three was an experience!

Cheeses from Milawa Cheese are available across Australia, but you may have to search a bit. In WA they are distributed by European Foods, so the Re store would be a reasonable bet. 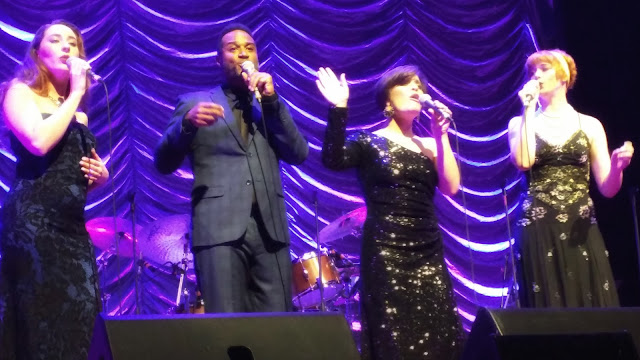 Last night we went to see Scott Bradley's Post Modern Jukebox for the fourth time. And for the fifth time in Perth, it was a sellout show.  Anyone who has been to one of their performances would not be surprised by this.
The tour group conisists of five singers, five musicians, a tap-dancer, and a phenomenal grasp of every musical style known. The greater collective runs to ... it must be nearly a hundred performers.
Performing last night were:
The irrepressible and multi-talented Aubrey Logan on her first visit to Perth. Possesses a wicked sense of humour, an amazing vocal range, and killer trombone skills. Steaming her way through Taylor Smith's "Bad Blood", and rocking out in full 60's style for The Red Hot Chilli Peppers' "Give it Away".

The unstoppable Casey Abrams, on a return visit to Perth (his third, I think), shown on the right with Adam Kubota (bass, bass guitar, musical director, and tour band leader). This is the man who took Toto'…
Read more

Mr Barnes stands up for the Real Australia. The one where everyone is welcome and included.

July 21, 2015
Mr Barnes stands up for the Real Australia. The one where everyone is welcome and included.

In which Jimmy Barnes is awesome.
https://www.facebook.com/jimmybarnesofficial/posts/974559009273159
Read more