Showing posts from December, 2021
Show All

From solargraph to cyanotype 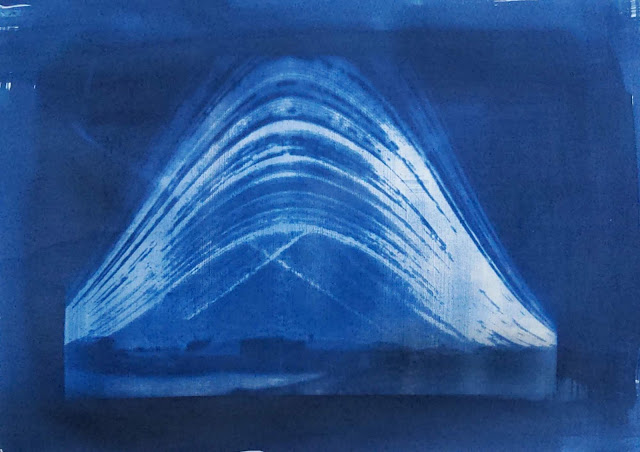 I usually use cyanotype as an in-camera negative. This is a slow process - each exposure is a couple of hours at least.  I also shoot solargraphs. This is also a slow process, with exposures measured in days or months. Or even years.  As you all saw, a few days ago I brought in one of my six month solargraphs. The resulting image was dramatic enough, that I thought it would make a good cyanotype contact print. This is a very fast process by comparison. Exposure time in Perth in mid-summer is around 4-5 minutes.  Here is the result. I think I will do another print, this time on a tee-shirt!
1 comment
Read more

How casting can change a scene 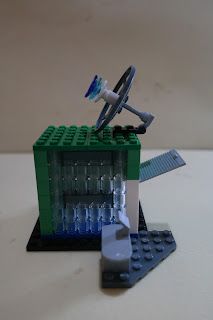 Consider the following installation.  By itself, it could be almost anything. Maybe slightly ominous, depending on what the music is like. Now let's add a character. Maybe a nice old lady astrophysicist . Suddenly, it is probably just some funky radio telescope or similar. Perfectly normal, nothing bad is going to happen to anyone because of it. So let's change it to some bloke scientist. Everything is still probably fine, depending on the music. Just some researcher. This does not mean that things might not go horribly wrong, but they seem to be perfectly normal. We can make it even more normal by using two characters - Honey! I'm home! But I digress. Back to the slow decline. Now things are looking dodgy. Red glasses, self-satisfied smirk, weird flask of something green... it all adds up to this is probably nothing good for anyone. But we can step it up more. OK, exposed brain alien dude. Let's face it, we're in for a rough and nasty ride. Probably with some awfu
Post a Comment
Read more 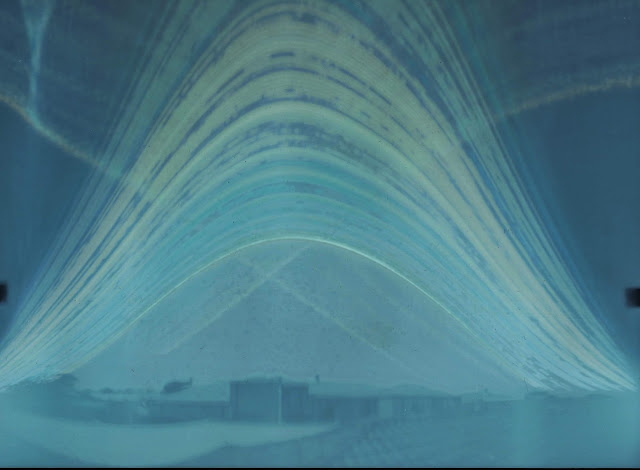 Taken with a Solarcan Eldorado over six months, starting on the Winter Solstice, and ending on Christmas day. View is looking across our roof to the neighbours.  Scanned with an Epson multifunction scanner, and processed in Snapseed. It is interesting (to me) that the Solarcan cameras have the pinhole only 4cm from the top of the 16cm can (about 2cm below the shoulder). Despite this, the Summer solstice, and the preceding month, are all too high in the sky to be fit in frame. From this I figure I'd need a can nearly 30cm tall  (and still the same diameter) to capture the entire arc.  I have now reloaded the can with some Ilford Multigrade III that I dug up from the back shed (which I have tested, and is still usable for this purpose).
Post a Comment
Read more

Back to that rich vein of videos, the 80s this time, and one of the musical greats the the era produced.  Our video is a stop-motion paper-cut surrealist dream-sequence, and that by itself would not gain it an entry to this series. What gets it in is the way it mirrors the song in a very literal way. This is someone who has achieved flight and is never returning to the ground. It might be an acid-fuelled vision of the narrative, but it is clearly what is going on.  I do wonder about the flippers and the slippers, though. Anyway, here is 1985's classic hit "And She Was" by Talking Heads from Little Creatures.
1 comment
Read more

Another fresh tune this week, with a track released just ten days ago! Hold on for a ride you've not seen the likes of since Galaxy Quest. And no, do not expect spaceships mit der blinkenlights. But do expect a bunch of very quirky and rather naive aliens. What do they want from us? Why did they come here? All will be revealed! Hailing from the Isle of Wight, here are Wet Leg with "Too Late".
Post a Comment
Read more

Back to a solid standby this week with one of Lindsey Stirling's earlier works.  In this one we get the whole Narnia thing without the religious overtones - a whole world on the other side of the closet, but you can only visit. Still it seems to give her strength, so props to her. It is interesting to contrast this with Monarch ( SFFMVotW-#67)  , which has some similar themes. Here is 2015's Take Flight, by Lindsey Stirling.
Post a Comment
Read more

The old gag goes "We have both kinds of music here - Country and Western". Well, I don't usually have a lot of time for either.  This song is an exception, and it was always a crying shame it never got a decent video, until 19 years later, when a band that I also rarely have a lot of time for did a cover.  And the confluence of genres, song, band, and video combined to create something vastly greater than any one of the parts. Enjoy "The Devil Went Down to Georgia" by Primus from 1998.
1 comment
Read more
More posts