Showing posts from October, 2018
Show All

Heads up Pamela Smith ! Originally shared by Dryade Geo Am only a couple of days away from moving house. Pretty sure I packed away my brain in one of those boxes... Will talk more soon. Hugs
Post a Comment
Read more

13 Reasons Why “Rosa” May Be One of the Most Important Episodes of Doctor Who Ever! – Doctor Who TV

From the musical “Initiative Q”: “The Internet is for Scams”

October 27, 2018
Originally shared by David Gerard From the musical “Initiative Q”: “The Internet is for Scams” https://davidgerard.co.uk/blockchain/2018/10/26/from-the-musical-initiative-q-the-internet-is-for-scams/ https://davidgerard.co.uk/blockchain/2018/10/26/from-the-musical-initiative-q-the-internet-is-for-scams/
Post a Comment
Read more

The article says it all, really.

October 26, 2018
The article says it all, really. Although I will point out that Lowering The Bar has a special place for 'Dwayne', and this comes close!! https://www.theroot.com/finally-black-poll-worker-calls-cops-on-suspicious-cau-1829994936
2 comments
Read more

PostmodernJukebox Blend Queen and The Buggles for a magnificent version of the classic one-hit wonder!

October 26, 2018
PostmodernJukebox Blend Queen and The Buggles for a magnificent version of the classic one-hit wonder! https://www.youtube.com/watch?v=N26_hRITlsU&feature=player_embedded
Post a Comment
Read more

Part of my birthday celebrations included a twilight cruise on the Duyfken - a locally built replica of the first...

Part of my birthday celebrations included a twilight cruise on the Duyfken - a locally built replica of the first european vessel to explore Australia. Thanks Alicia Smith!
5 comments
Read more

A tale of the only submarine to be a ship.

October 18, 2018
A tale of the only submarine to be a ship. Naval tradition is that all submarines are boats, no matter how big. And a ship, by sail definition, is a vessel square rigged on three masts. Originally shared by HACKADAY Out of fuel and far from home, this submarine set sails made from hammocks and blankets... and it worked! By the early 20th century, naval warfare was undergoing drastic technological changes. Ships were getting better and faster engines and were being outfitted with wireless communications, while naval aviation was coming into its own. The most dramatic… http://hackaday.com/2018/10/17/hacking-when-it-counts-setting-sail-in-a-submarine/
Post a Comment
Read more

Oh so very wrong .. and right!

October 17, 2018
Oh so very wrong .. and right! Via Stephen Gunnell Originally shared by Laura Ess As found on Facebook via Cthulhu Hand Luke . The perfect mashup. "There was me, that is Willy, and my three oompa-loompas, that is Squid, Nook, and Glick, and we sat in the Chocolate Factory trying to make up our rassoodocks what to do with the evening. The Chocolate Factory made milk-plus, milk plus whatever I decided we'd put in it, which is what we were drinking. This would sharpen you up and make you ready for a bit of messing with those damn kids and their parents."
Post a Comment
Read more 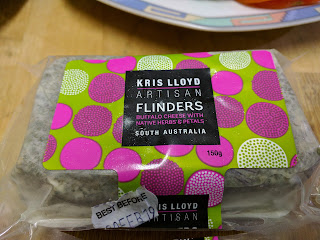 Flinders - Kris Lloyd This fresh cream style buffalo milk cheese is light and crisp. The herb and petal coating adds an extra savour dimension to the experience and lifts this above the usual. Served with a fresh salad and fresh baked 'rye' gluten-free buns, it is a good eating or salad cheese. http://krislloyd.com.au Kris Lloyd's products are available online for Metro area delivery only.
2 comments
Read more

Petite Fromage - Cambray Cheese Cambray Cheese's Petite Fromage are a delight not to be missed. We were introduced to these wonderful miniature white-mould cheese by the lovely folks at the Lakeside Restaurant at the Karri Valley Resort near Pemberton. There they served them baked and topped with honey and hazelnuts - a magnificent and simple dish that serves as a dessert or entree. Following a tip from the restaurant, we dry pan-fried ours - and you can see the result! The cheese itself is a white-mould wrapped bundle of delicious ooze - stunning with honey, nuts, dried fruits and the like. One of the finest white-mould cheeses I have ever encountered. Cambray Cheese products are available through selected outlets in the Perth metro area and in the South-West. http://www.cambraycheese.com.au/
Post a Comment
Read more

Jacky White - Limestone Coast Cheese Company I have no website or availability information for Limestone Coast Cheese Company - just a white pages listing! https://www.whitepages.com.au/limestone-coast-cheese-11494646/lucindale-sa-11494651B This is a great shame, as their Jacky White Camembert is deliciously mushroomy and creamy, with just a touch of bite on the rind. Excellent with fruit, it also goes superbly with a honey-cured ham. If you can find it, try it!
2 comments
Read more

Via Robyn Richards Originally shared by David Blanar It's been an emotional roller coaster this week and taken me a little while to put my thoughts together on the news about G+. I'm glad people are finding workable alternatives. I wish them a smooth and seamless migration. I'm not ready to leave and don't (yet) feel the need. But that may change. I've not met Mike Elgan though I have many times appreciated his words and ideas through the years; I fully expect he would be great to have a beer with. But I profoundly (and respectfully) disagree with his conclusion: Social is dead and we can - and should - retreat to our blog safe spaces. (See his excellent and thought-provoking post: https://plus.google.com/+MikeElgan/posts/gNz2B2Rw7uV ) This ghettoised approach will never work for me. Nor do I think it desirable on a societal level. Is social dead? That seems dramatic, even if worth seriously discussing. We need public commons and shared spaces that are not under the
1 comment
Read more

"Boy Bands, Vampires, and Other Holes in the Fabric of the Universe."

So I've set myself up on MeWe

Originally shared by Paul Snedden Meanwhile, in Sydney I will not go without a fight. #aboutaustralia plus.google.com/collection/gRdpR
Post a Comment
Read more

There is quite a good dinosaur display going on at Perth Zoo at the moment.

There is quite a good dinosaur display going on at Perth Zoo at the moment. While the mummy T-Rex has not noticed the little humans, baby T-Rex looks like they are in the mood for mammal meat!
Post a Comment
Read more

October 09, 2018
Originally shared by Joseph Debattista Google-inc don't shut down Google+ Google+ is the social network that I, and countless others call home. It has a unique skillset that no other social media platform has, especially its rich and diverse community. Today, Google announced they were going to close the platform in 10 months. https://www.change.org/p/google-inc-don-t-shut-down-google-plus-54f15bea-1d8c-4be9-a53f-e2ceee1302f4?recruiter=895811422&utm_source=share_petition&utm_medium=copylink&utm_campaign=psf_combo_share_abi.pacific_abi_gmail_send.variation.pacific_abi_select_all_contacts.select_all.pacific_email_copy_en_gb_4.v1.pacific_email_copy_en_us_3.control.pacific_email_copy_en_us_5.v1.lightning_share_by_medium_message.control.lightning_2primary_share_options_more.fake_control&utm_term=share_petition
2 comments
Read more

Fascinating, sad, and inspiring all at once.

October 08, 2018
Fascinating, sad, and inspiring all at once. In particular, I am now inspired to hunt down their work! http://mobile.abc.net.au/news/2018-10-08/manga-artist-queenie-chan-shattering-stereotypes/10147166
2 comments
Read more

October 07, 2018
Originally shared by Scott Hamilton (Dame Nilly Lunchalot) Right Wing "shock jock" Alan Jones of Sydney commercial radio station 2GB, berated and bullied Chief Executive of the Sydney Opera House, Louise Herron, to allow a commercial advert for a horse race to be projected on the sails of the UNESCO heritage listed building, then said he was going to call the Premier of the State and demand she be sacked from the SOH. That afternoon, NSW Premier Gladys Berejiklian bowed to Alan Jones and instructed the SOH to allow the advert to be projected. The citizens of Sydney have decided this is not how the iconic structure should be used, and that the bullying of CEO and Premier is not what they want. An online petition was started, as if the case these days, however in 2 days it has attracted more signatures than the average daily audience of 2GB, and should exceed the daily audience for Alan Jones by the Monday morning news. https://www.change.org/p/defend-our-opera-house-support-lo
1 comment
Read more

I was just going to do a selfie (thanks to a middle initial of 'D'), but then I thought a ceRtifieD ReD hat would be...

I was just going to do a selfie (thanks to a middle initial of 'D'), but then I thought a ceRtifieD ReD hat would be better! #letters_RD
2 comments
Read more

Disturbing, to say the least.

October 05, 2018
Disturbing, to say the least. Alas, nothing verifiable in the article, so take that into consideration. Originally shared by Winchell Chung https://www.bloomberg.com/news/features/2018-10-04/the-big-hack-how-china-used-a-tiny-chip-to-infiltrate-america-s-top-companies
Post a Comment
Read more

With the weather warming up, this is a timely warning.

With the weather warming up, this is a timely warning. Originally shared by Paul Snedden Drop Bear Awareness Week Stay safe out there. As the weather warms up here in Australia, it's time for many of us to get out and about for barbies and bushwalking. Of course, there's also the risk of Drop Bear attack. You need to be aware of your surroundings at all times. The risk is real. #AboutAustralia goo.gl/688VLF or plus.google.com/collection/gRdpR #dropbears #lookupandlive #straya #australia
Post a Comment
Read more

Alicia Smith kicks off #inktober in style with one of the deadliest plants there is - the commonly-named 1080 Bush.

Alicia Smith kicks off #inktober in style with one of the deadliest plants there is - the commonly-named 1080 Bush. As deadly as it is, most W.A. native herbivores have evolved to tolerate (at least) the poison, and the carnivores likewise. Originally shared by Alicia Smith #Inktober2018 #Inktober #drawingwithoutanet One of our many Gastrolobium species, bearer of the 1080 poison. I wanted to draw a Wyvern really, but that would be venom, not poison. Poison you can inhale, ingest or absorb through the skin, but venom needs to be delivered through fangs or stingers. Try to avoid both! Going with the official prompts this time.
Post a Comment
Read more
More posts