And that was some weekend!

March 08, 2021
Well, that was a fairly epic long weekend.
The epic bit started on Sunday morning, when we dropped by the Stirling Farmers' Market to pick up our tomato order.
45kg of them. Plus capsicums, onions, apples, chillies, and some other vague veggies.
Then it was back home, and dusting off our old Weber kettle BBQ, and pulling out the GoSun Fusion.
Into each we tossed as many tomatoes as would fit (in trays in the Weber), and set them to roasting.
Inside, we started chopping onions, more tomatoes, and capsicums - which then went straight onto the stove to become salsa.
Around the same time, we bolted the tomato mill to the kitchen island, and brought in the first batch of tomatoes. These went into the mill, and quickly became the first of many batches of passata. The squeezings joined still more tomatoes, onions and apples in another pot.
By the time we hit 11pm, we had produced and processed in the preserver 22 bottles of passata, and 10 jars of salsa, representing about 3/4 of the 45kg.
I took today off from work, and we went straight back into it after breakfast, bringing the onion/tomato/apple mix to  a simmer and adding vinegar, molasses and various spices to start a ketchup run. Meanwhile, Leece start chopping more tomatoes, onions, capsicums, chillies, and garlic to get another batch of salsa going.
While this happened, I went in search of more jars.
Upon my return (and a quick lunch) we did an initial process of the ketchup, rebalanced the acidity and seasoning, and let  it simmer for a while longer. While this happened, we re-processed a handful of jars that had not sealed properly the first time. Then it was time to bottle the ketchup. 9 bottles, plus an early load of salsa.
A break for our Noongar class, and then bottling the rest of the salsa, starting a new batch of ketchup, and roasting the rest of the tomatoes to do something to them tomorrow night.
Leaving us with, so far, 22 bottles of passata, 20 jars of salsa and 9 bottles of ketchup. There are probably another 4-5 bottles of ketchup on the go, and whatever it is that we are going to do with the 3-4kg of roasted tomatoes.
Basically, this is a year's supply of tomato products. Total cost was around $100, plus our time, but giving us a product that is much nicer than anything you can buy, and one we can say we know *exactly* what is in it. 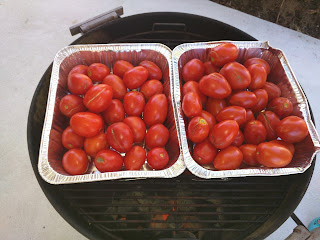