The Solarcan Puck is a great little reusable solargraphy camera. It has a relatively wide aperture (f/90), so it can create  a decent image in a single day.  The limitation is that it has (for a camera of this type) a relatively narrow field of view - about 120 degrees.

What do the the rest of the world have to do then?

You can restrict yourself to winter months - but that is not much fun.

The other alternative is to angle your Puck upwards. But how far?

In the worst case, on the Equator, the sun will be directly overhead at Solstice. This means that the Puck will have to be angled upwards at least 30 degrees - but this would mean that the sun's path would just glance off the edge of the paper, so you need more. At least 60 degrees of tilt at the Equator to get a decent track.

At 30 degrees latitude the sun still gets to about 85 degrees (about 5 off vertical) at Solstice, so you are still going to have to tilt above 45 degrees to get  a good track.

That said, even if you don't angle it high enough, you can still get stunning pictures. This one is a 4 day exposure of the Geraldton Lighthouse. 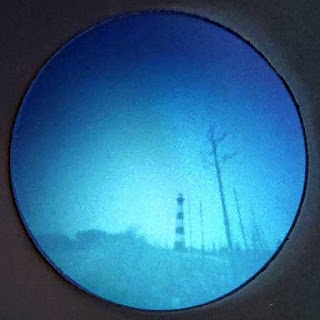