April 04, 2020
It will come as no surprise to folks that I tend to acquire a variety of cooking devices - some of them traditional, some of them on the bleeding edge of technology.

What I do avoid are devices with one purpose - unless they happen to do it extraordinarily well, and take minimal space. My pear corer, for example, or the peach pitter. Everything else serves multiple uses. A rice cooker, for example will also cook many other rice-based dishes, and will serve as a steamer as well.

Today four of these devices met in in the creation of a simple dish, but made so much simpler and tastier as a result.

The first two tools were actually used nearly four months ago. Our Fowlers Vacola preserving system, and our tomato mill. These were used together to produce two of today's ingredients - a bottle of preserved tomatoes, and a bottle of passata. 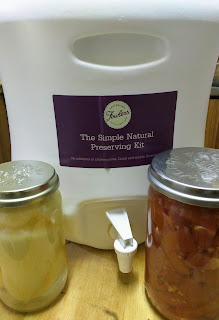 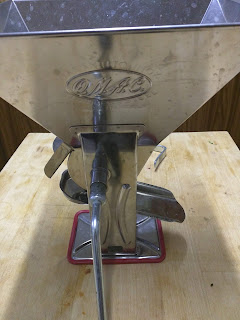 The tomato mill is a traditional Italian design - apparently from the 1920s, much later than I expected! It can also mill any other soft foods into sauces, removing skins and seeds in the process.

Next on the list is considerably less traditional - our TM31 Thermomix (yes, we are followers of the cult of Thermomix). A combined blender, cook-pot, and electronic scales, the Thermomix has become our go-to for sauce and soup making. In this case, it produced a beef ragout, and a bechemal sauce with minimal attention and intervention. Our home-made passata formed the base of the ragout, and bay leaves from our garden flavoured the bechemal. 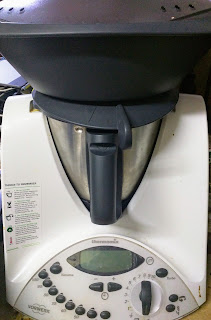 These all combined with some Barilla gluten-free lasagne sheets in the last, and possibly oddest, of the devices, and one that needs a little more explanation.

We enjoy camping - we don't do it anywhere near as often as we like, but we do enjoy it, and when we do do it, we like to be comfortable. We also enjoy kayaking, and, when we can, combine the two.

So a few years ago, when we got wind of a company producing a hand-bag sized solar cooker, we we hooked on the idea. The GoSun Go units, when they arrived, proved much handier than we expected, each of the two able to cook a meal for on in about 50-60  minutes if perfectly aligned, or in a couple of hours if vaguely pointed at a clearish sky. Say, for example, bolted to the back of a kayak. 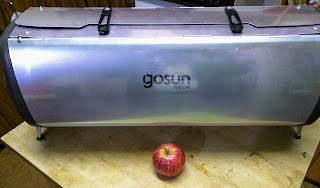 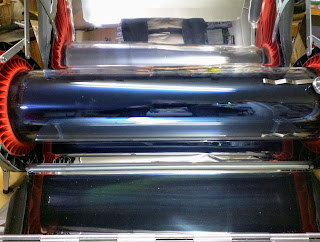 Early last year they announced a hybrid solar-electric version - the GoSun Fusion - suitable to cook for 5-6 people. So we leapt on that, and when it arrived just before Christmas, it was even better than we'd hoped. Able to cook either using the sun, or using a mere 12V/15A power supply (that's 180W - about 2 incandescent light bulbs), either via battery or an optional AC adaptor, it sits somewhere between BBQ, oven, and steamer.  It was into the cooking tray of this that we assembled the lasagne, and (given it was heavily overcast) plugged it in.

The uncooked lasagne in the cooking tray of the Fusion. Photo by Leece

75 minutes later we were serving ourselves lasagne, having used technologies spanning three centuries. And, yes, it was delicious!

Straight out of the Fusion. Photo by Leece 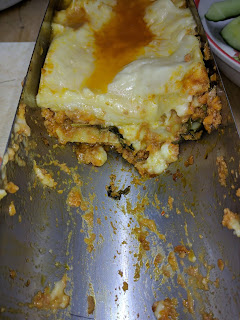 A cross-section of the lasagne. Photo by Leece